Gordon Hill was born in Bolton, Lancashire. He originally trained as a teacher and went on to become a headteacher both in England and subsequently in the United States where he lived and worked for 30 years. He is well known as having been a top-level football referee in the 1970s, taking charge of high profile games such as the 1975 League Cup Final.

As a referee he was known for a progressive ‘player-centred’ approach, well regarded by players, managers and fans, but not always finding favour with the game’s authorities. Gordon has published a football autobiography Give a Little Whistle: The Recollections of a Remarkable Referee and there is more information about his football career on this Wikipedia page.

Gordon had a lifelong interest in art and latterly lived in south-west England where he had a studio. He continued to paint and draw every day until his passing on 21st March 2019. 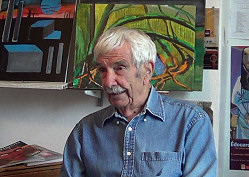 Gordon in his studio today 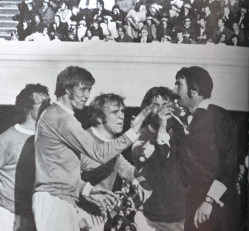